For a Antoine Bouvard [Marc Aldine] Valuation please contact the gallery with details:

Known as Antoine Bouvard [Marc Aldine], he was born Eloi-Noel Isidore Beraud, in Saint-Etienne in 1887. In 1885 he was placed in a foster home at Toul until 1894.

He was educated at Beaux-Arts where he studied and copied old masters before forming his own style around 1900. Bouvard painted in the Barbizon style as well as some Art Nouveau scenes signed N.Beraud and Pelletier. During this period up to the end of the 1920s he also used watercolour and gouache.

From 1902 to the end of 1910 he drew a series of postcards for British business which introduced him to the British public. In 1912 his son Eloi-Noel, also an artist, was born and during the following wartime years his output was eclectic.

After the war in 1919 he returned to Paris to design models and publicity posters. In 1924 he moved to Val d’Oise and set up his studio and worked on his garden. 1925 was to bring a contract to illustrate children’s books under the name Luda or Beraud.

The turning point came in 1930 when he discovered Venice and he decided to dedicate the rest of his efforts to only painting Venice. Eloi met Ruben Santoro (1859-1942) who became a friend and mentor.

In Nice on his way back from Venice he signed a contract with an art gallery whose owner suggested using the pseudonym of Marc Aldine. This is one of two names he used for the rest of his career. The other name, Bouvard, was suggested by an English gallery to appeal to the British market.

Where did Antonine Bouvard Sell? 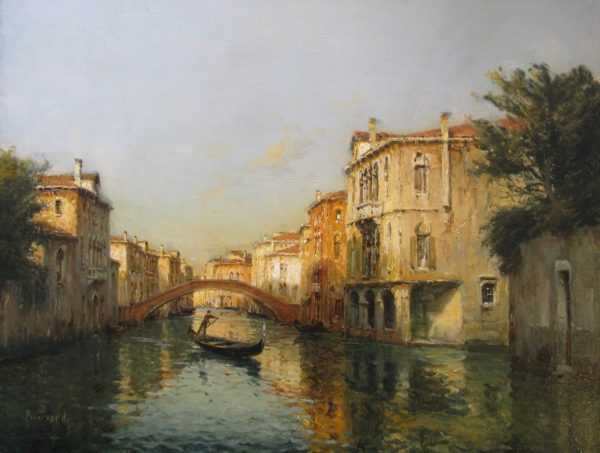