Many of our clients are looking to avoid the high cost of selling Deryck Foster at auction and so find selling to our specialist gallery a more favourable option.

For a Deryck Foster Painting Valuation please contact the gallery with details:

Deryck Foster was born in Bournemouth in 1924.  He learned to sail around Christchurch Harbour in Dorset. In the WWII he served in the RAF in Lancaster bombers. He painted all types of marine vessels which reflects his own seafaring experiences of off-shore racing, cruising, dinghy racing and training ships. Deryck Foster was also an active member of the RNLI lifeboat crew in Yarmouth, Isle of Wight.

He became a full member of the Royal Society of Marine Artists in 1964. Commissioned by Prime Minister Ted Heath to paint a painting of his yacht Morning Cloud and one of ‘Bloodhound’ owned by the Queen and Duke of Edinburgh.

In 1978 Deryck Foster and his wife moved to Bermuda to produce paintings to record the Island’s history. Eight years later they moved to Majorca where he painted historical pictures for American collectors.

In 1998 he moved to Rutland where with the aid of his knowledge and historic plans and drawings from Grenwich Maritime Museum he constructed accurate scale models of ships.

He painted mainly from his Yarmouth, Isle of Wight studio, with subjects including the Solent, Cowes, The Needles, Yarmouth Quay, Hurst Castle, Lymington, Keyhaven, Beaulieu, Southampton Water and the River Hamble.

Did he work in other media?

He mainly painted in oil on artist stretched canvas over board, hardboard or oil on canvas.

Later in life he made ships models.

Where did he Sell?

He sold direct, at art dealers and exhibitions. We have seen gallery labels from Royal Society of Marine Artists, London Boat Show and provenance from auction houses including Bonhams Auctioneers, Sothebys Auction and Christies Auctions. 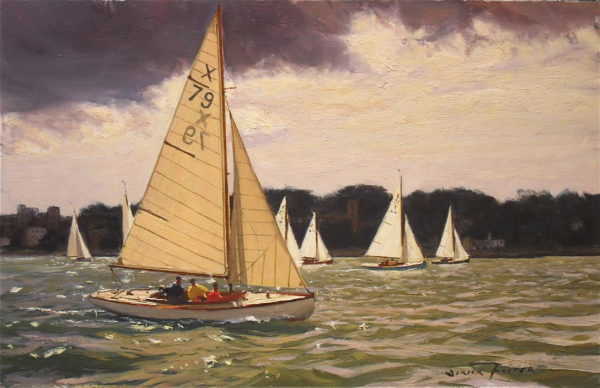 Deryck Foster, X-Boats in the Solent 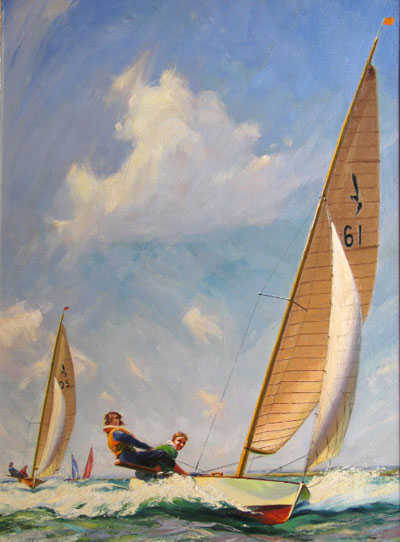 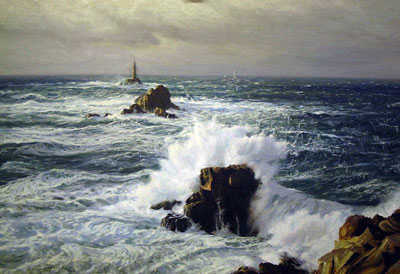 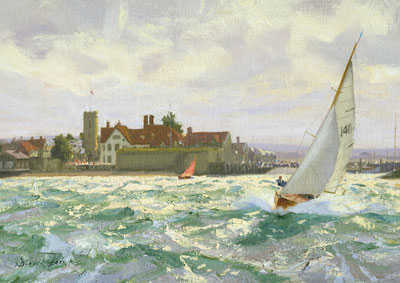